The War in Ukraine has been the talking point of the nascent year and sporting bodies across the board have announced sanctions against the country. Shows of support from every corner have been flooding in calling for an end to the unprompted war and international sporting federations have stood their ground by taking a hard-line stance. Various sporting events that had been slated to be staged in Russia have been moved out since, and universally recognisable entities have started imposing sanctions on Russia.

Football has always been a lucrative platform for ‘sports washing’ and lobbying for soft power due to the wide reach of the game. And the very same factors that bind an international community together have been historically exploited by men in power to bend the narrative to their own liking. This is a phenomenon that has been around long enough for even casual observers to take notice of. But, there was to be no leeway for the Reds this time around. Football was one of the early responders to the crisis as governing bodies and headline entities used their position of power to establish hard boundaries in regards to the sporting future of Russia.

On Thursday, it came to light that UEFA had decided to move the federation’s headline spectacle out of Russia citing the predicament, having originally awarded the right to host this year’s Champions League final in the Russian city of St. Petersburg UEFA put out a statement that read, “UEFA shares the international community’s significant concern for the security situation developing in Europe and strongly condemns the ongoing Russian military invasion in Ukraine”. An extraordinary meeting of the UEFA Executive Committee convened after the initial statement and decided to relocate the Champions League Final to Paris. 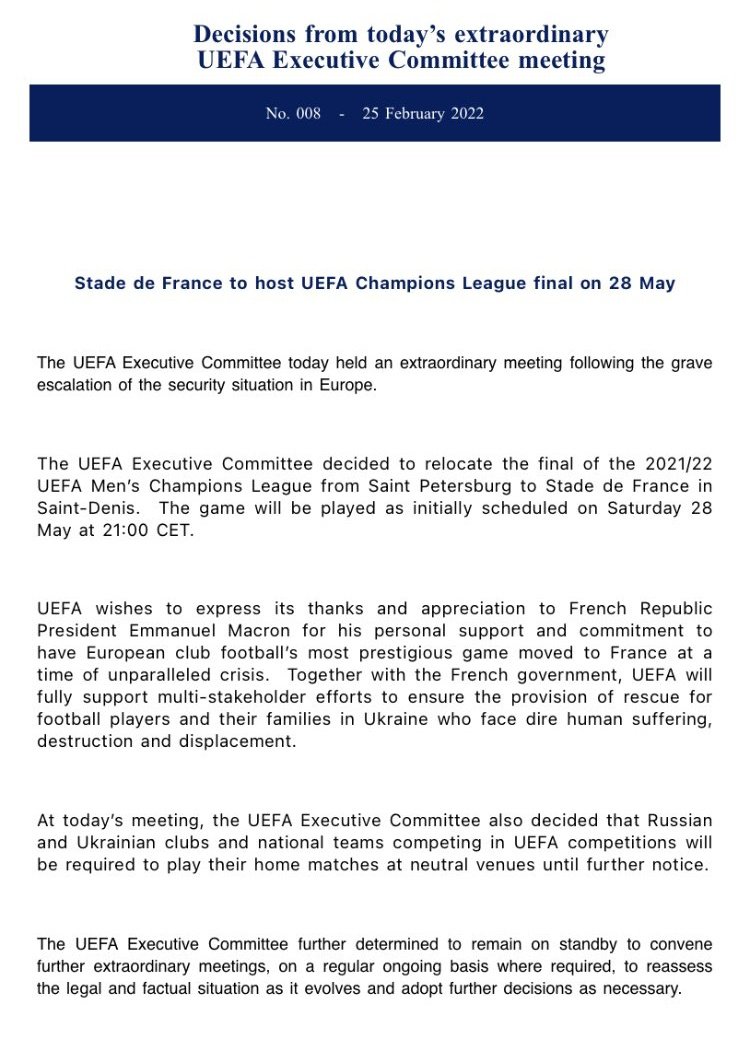 On Friday, the UEFA executive committee ruled that Russian and Ukrainian teams will not be allowed to host games in its competitions Europa League club from Russia, Spartak Moscow, who were drawn to face RB Leipig (On Friday) will need to find a neutral venue outside the country to host the second leg of their European fixture.

With the FIFA World Cup 2022 looming large on the horizon, the qualifiers for the biggest showpiece on the planet were heating up. And three nations, Sweden, Poland, and Czech Republic had their playoff matches scheduled to be hosted in Russia during the third week of March. However, true to the design of recent events, the FAs (Football Associations) of the three countries put up a joint statement elucidating their decision to not entertain the fixtures being hosted in the Russian territory.

“The signatories to this appeal do not consider travelling to Russia and playing football matches there. The military escalation we are observing entails serious consequences and considerably lower safety for our national football teams and official delegations,” the statement read.

The trinity called on FIFA and UEFA to come up with a viable alternative solution for the playoff games. 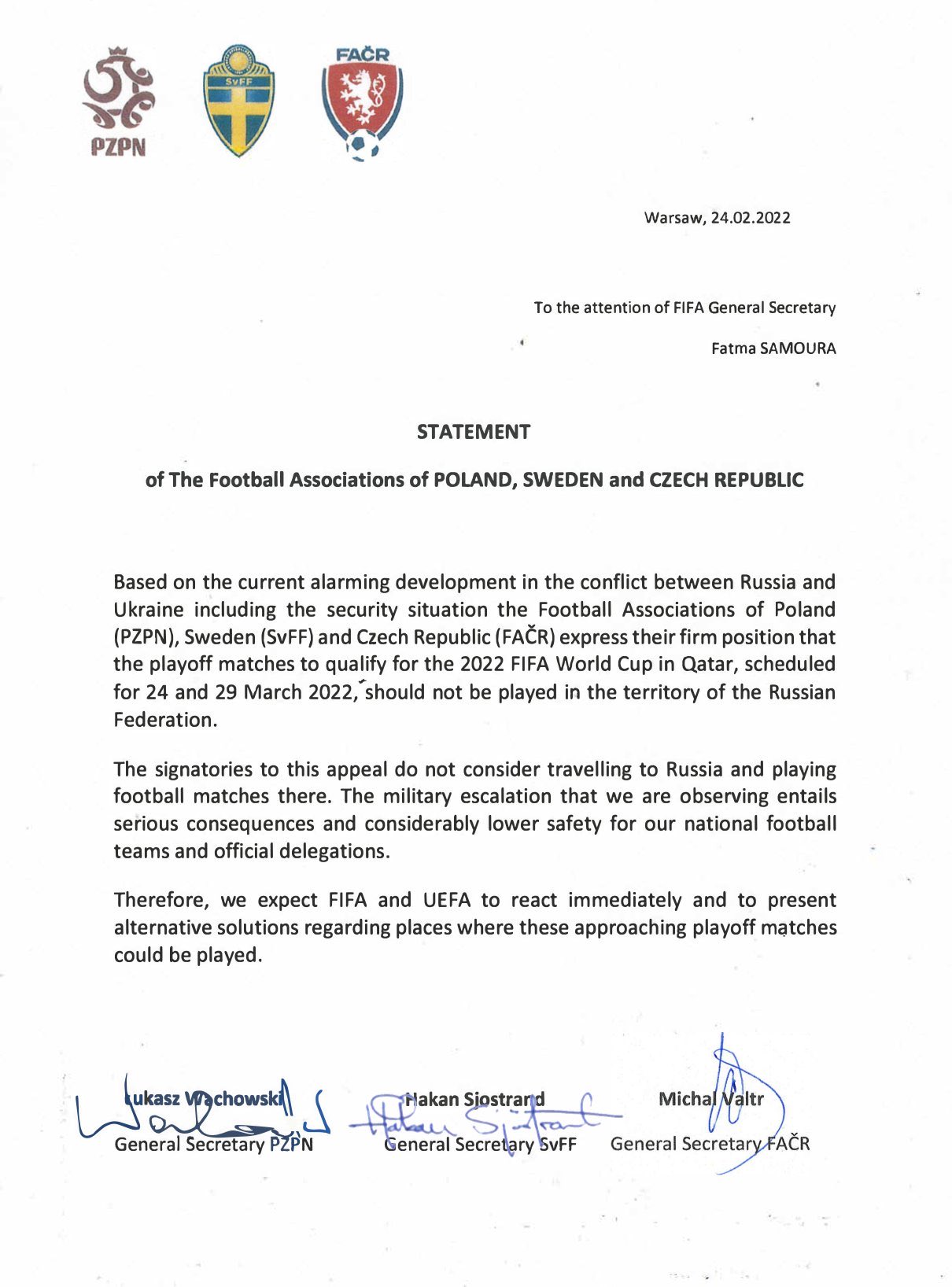 On Sunday, The English FA said that the England football team will not play any matches against Russia for the foreseeable future in solidarity with Ukraine and to condemn the atrocious activities being committed by Russia. 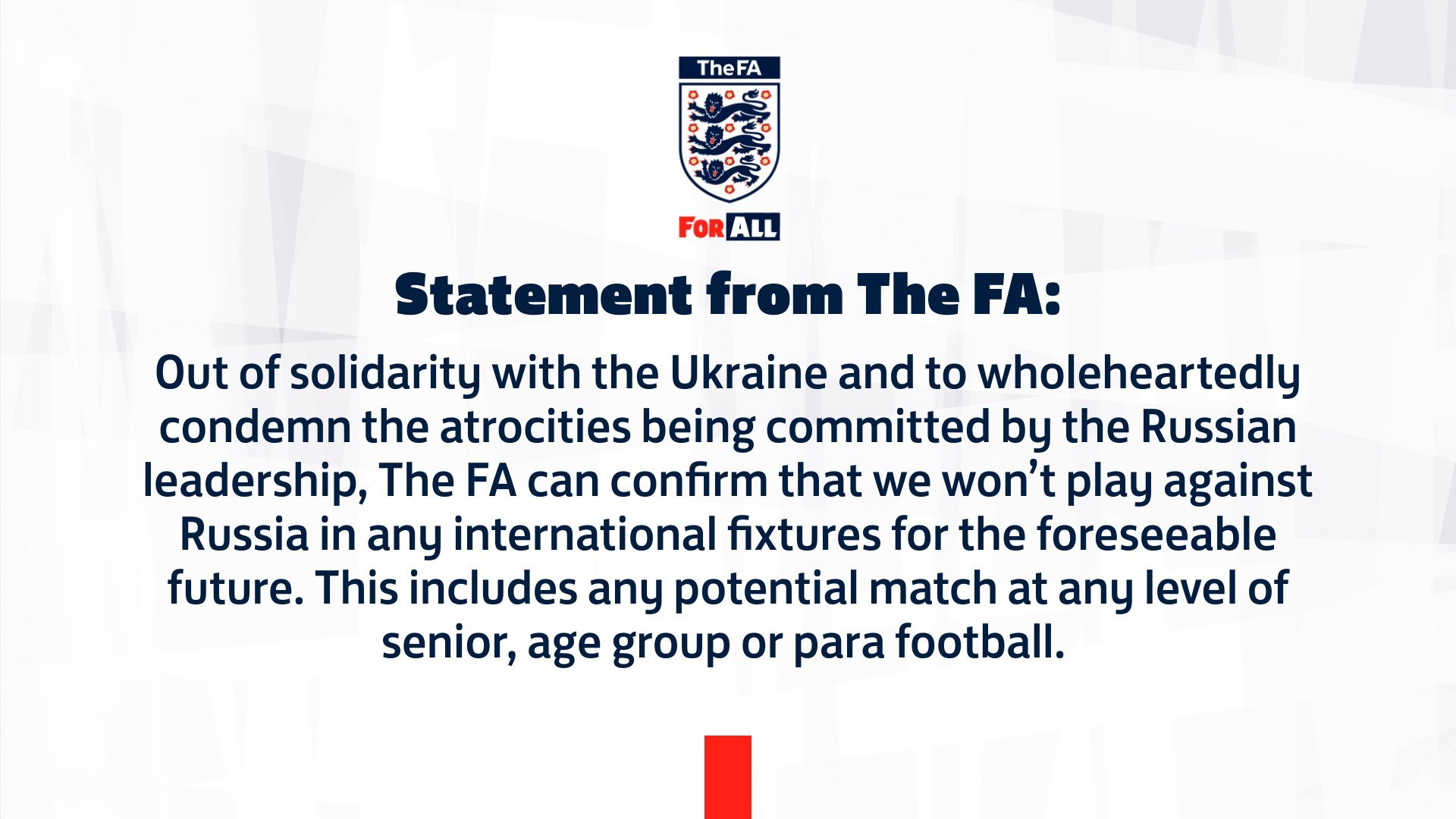 Following the appeals made by the FAs of World football, FIFA imposed a number of sanctions on Russia. ”First and foremost, FIFA would like to reiterate its condemnation of the use of force by Russia in its invasion of Ukraine,” FIFA said in a statement. The sanctions slapped on Russia as a result of its hostility towards Ukrain include:

-No international competition shall be played on the territory of Russia, with ‘home’ matches being played on neutral territory and without spectators.

-No flag or anthem of Russia will be used in matches where teams from the Football Union of Russia participate. 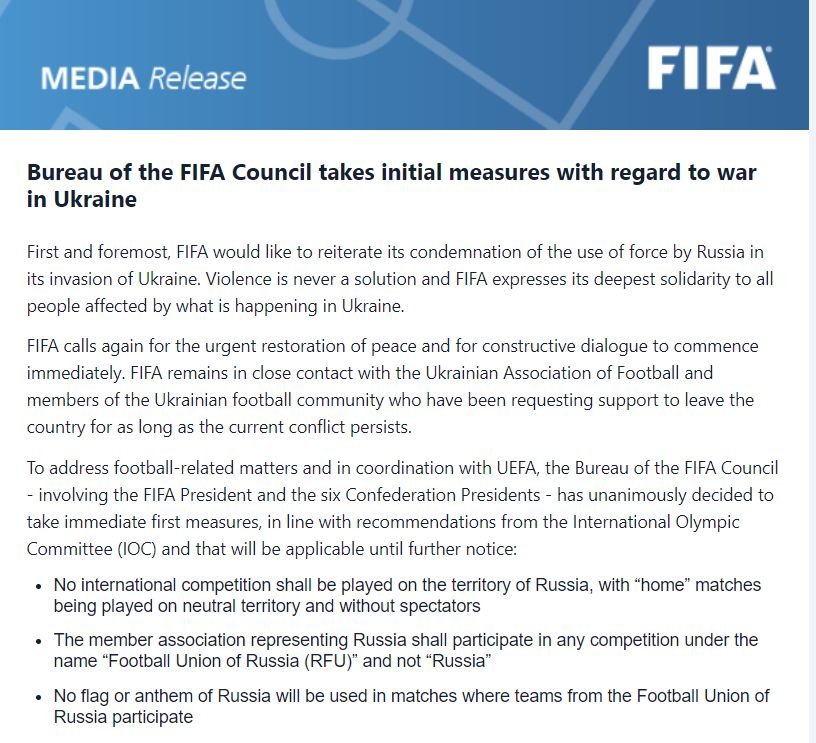 UEFA and FIFA announced that Russian clubs, as well as the national teams, are suspended from all international competitions “until further notice”, amid the ongoing war with Ukraine. FIFA and UEFA announced Russia has been expelled from the 2022 World Cup and its teams suspended from all international football competitions, in a joint statement on Monday. “FIFA and UEFA have today decided together that all Russian teams, whether national representative teams or club teams, shall be suspended from participation in both FIFA and UEFA competitions until further notice,” FIFA and UEFA said. “Football is fully united here and in full solidarity with all the people affected in Ukraine,” the statement added. The announcement also affects Russian clubs involved in European competitions. Russia were due to play the Netherlands, Sweden, and Switzerland in their group at the women’s Euro. Spartak Moscow had been due to face RB Leipzig of Germany in the Europa League last 16 next month. 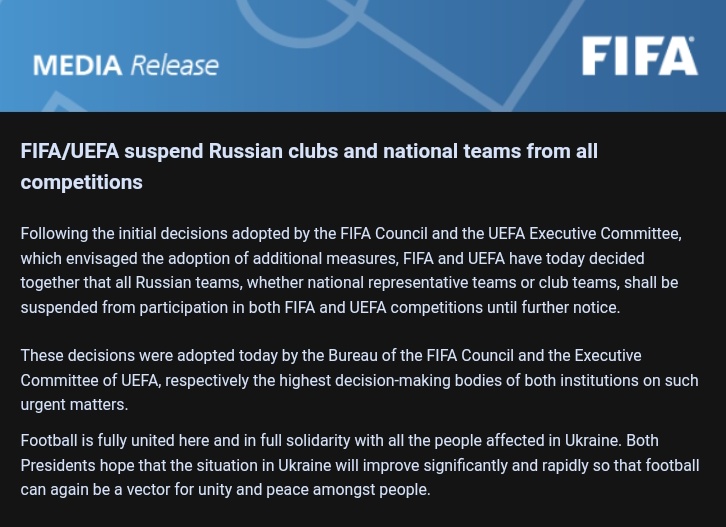 English football club Chelsea FC, owned by Russian oligarch Roman Abramovic, were suspended in a state of limbo when their owner was named one of 35 key enablers of the Putin regime. A couple of days of disquiet led to the moment when Abramovic handed over the care and stewardship of the club to the trustees of its charitable foundation.

” I have always taken decisions with the Club’s best interest at heart. I remain committed to these values. That is why I am today giving trustees of Chelsea’s charitable Foundation the stewardship and care of Chelsea FC. I believe that currently, they are in the best position to look after the interests of the Club, players, staff, and fans.” said Abramovic 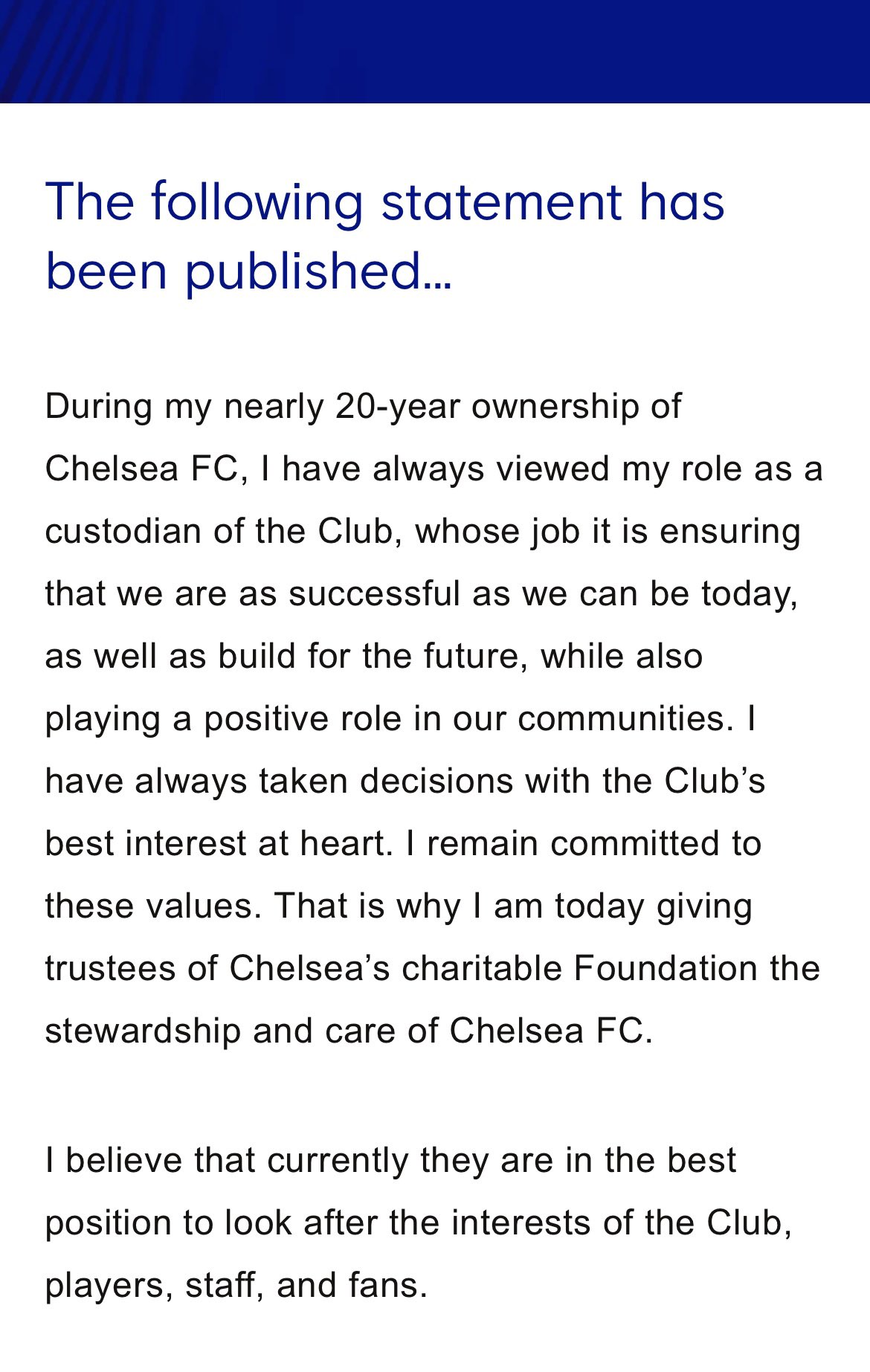 German Football Club Schalke 04 who have had a long-standing relationship with Russian company Gazprom decided to discard the credentials of the energy giants that have featured on the club’s jersey in response to Russia’s recent militant act.

“Following recent developments, FC Schalke 04 have decided to remove the logo of main sponsor GAZPROM from the club’s shirts. It will be replaced by lettering reading ‘Schalke 04’ instead,” a post on the club’s official Twitter handle read. 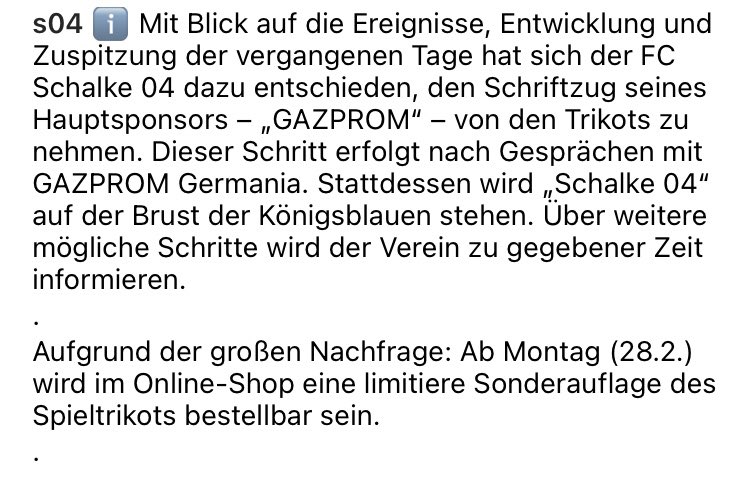 Last Thursday, the British government had imposed a biting packet of sanctions on Moscow, including the ban of Russia’s flagship carrier Aeroflot from UK airspace. Manchester United dropped their sponsorship arrangement with Aeroflot after President Vladimir Putin unleashed a full-scale invasion of Ukraine. “In light of events in Ukraine, we have withdrawn Aeroflot’s sponsorship rights,” United said in a statement. “We share the concerns of our fans around the world and extend our sympathies to those affected.”

Less than a week after the conclusion of the Beijing 2022 Winter Olympic Games, the IOC called on the sporting bodies of the world to refrain from going through with their commitments and fixtures in Russia. The IOC couldn’t just stand by and watch as Russia breached the Olympic truce by invading the sovereign territory. A section of the Russian troops breached the boundaries of Ukraine through Belarus, an ally of Russia. And as a result, the IOC issued a statement that outlined that in addition to federations scrapping or moving their sporting events out of Russia, the flags and anthems of Russia and Belarus are not be used at international sporting events.

“The IOC (board) expresses its deep concerns about the safety of the members of the Olympic community in Ukraine and stands in full solidarity.”

After a detailed discussion between the FIA, F1 teams, and all relevant stakeholders, the FIA decided “that it is impossible to hold the Russian Grand Prix in the current circumstances.” 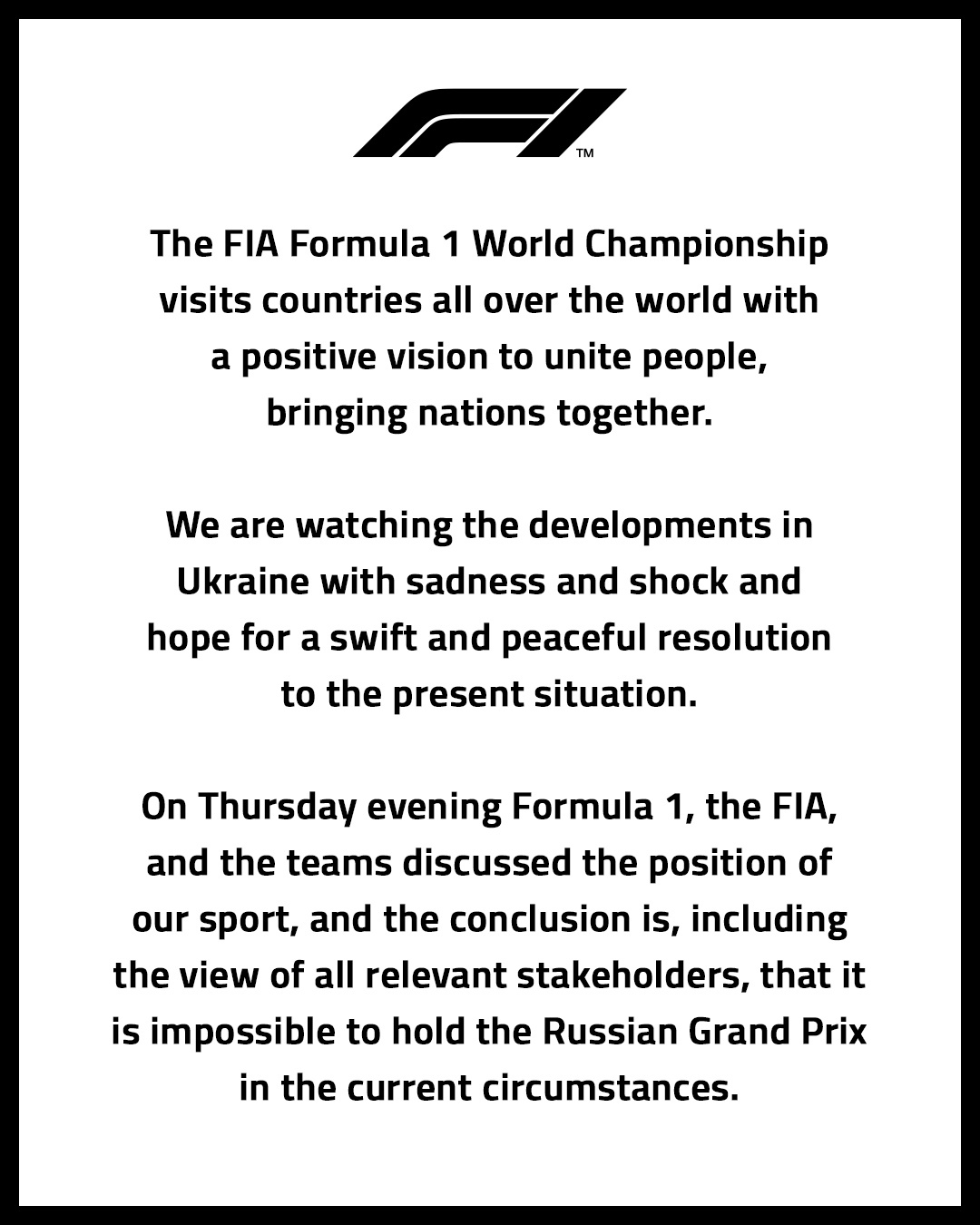 This decision from the racing authorities followed a call for a boycott of the race in Russia by four-time F1 champions Sebastian Vettel. The German driver said he will not feature in the Russian Grand Prix. He was quoted saying, “My own opinion is I should not go, I will not go. I think it’s wrong to race in the country. I’m sorry for the innocent people that are losing their lives, that are getting killed (for) stupid reasons and a very strange and mad leadership.”

“I’m sure it’s something we’ll talk about, but personally I’m shocked and sad to see what’s going on, so we will see going forward but I think my decision is already made.”

The ongoing uncertainty and violence in the region have pushed the ATP to postpone the tournament that was due to take place in Moscow at the end of February. 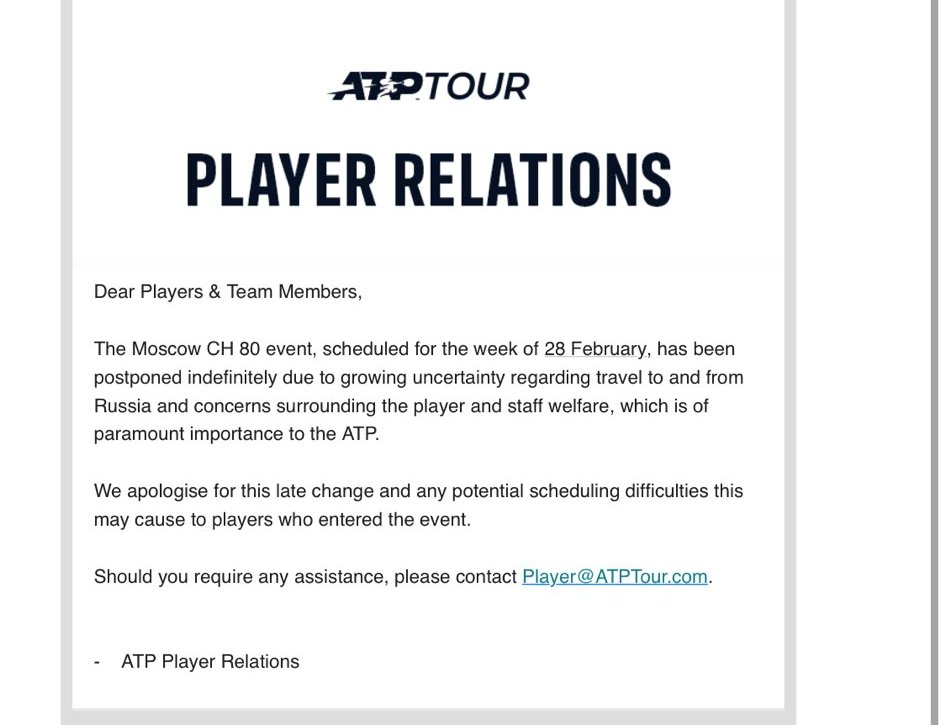 “It was definitely not easy to play and I am happy that I managed to win the match. That was a little bit of a roller-coaster day.” In a beautifully ironic sporting moment that saw the unison of individuals representing opposite sides of the war, Andrey Rublev of Russia paired up with Ukrainian Denys Molchanov to win the doubles title in Marseille a couple of weeks ago.

On speaking with regards to the war on Thursday, the world number 7 was quoted saying, “In these moments you realise that my match is not important. It’s not about my match, how it affects me. What’s happening is much more terrible. You realise how important (it) is to have peace in the world and to respect each other no matter what, to be united. It’s about that. We should take care of our earth and of each other. This is the most important thing.”

The International Ski Federation (FIS) said that Russia will not host any more World Cup events this winter, the governing body said Friday. FIS cited ”the safety of all participants and to maintain the integrity of the World Cup” for calling off five scheduled events in the next month. Replacement venues are being sought. While Norway Ski Federation called for a harder stance declaring that Russian athletes were not welcome to compete in their land because of violation of international laws and attacks on Ukraine.

“The Norwegian Ski Federation’s message to Russia and Russian athletes is crystal clear; We do not want your participation! Sport is not detached from this and cannot remain passive to what is happening now.”

After consulting the athletes and stakeholders, swimming’s global governing body FINA has called off the biannual World Junior Swimming Championships that were set to take place in Kazan, Russia, in late August. FINA also called off the men’s water polo World League match slated to take place in St. Petersburg next month. “FINA will not be holding any future events in Russia if this grave crisis continues,” the group added in a statement on Sunday.